5/6 Grade Teams All Smiles After Practice 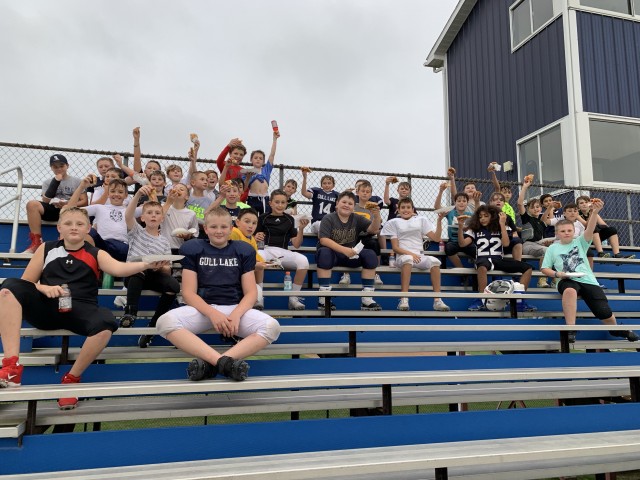 Last season both 5/6 grade teams finished with 0 wins and 6 losses.  This season coach Strickler's team already has a win under their belt and coach Ricca's team is ready to add a win on Saturday.  It isn't too often where teams are all smiles after practice, but the teams were happy to have a surprise pizza party after a good practice. "We decided the teams deserved a pizza party.  We have had little distractions and challenges with kids messing around. We are able to work on more in practice and implement more plays", said coach Ricca. "We spend about 5 hours a week practicing each week and the boys are taking full advantadge of that time".  Most people think about football as kids running windsprints and doing updowns.  The Gull Lake 5/6 program has provided the kids each week with a life lesson as part of practice.  They do team activities which get them thinking and sometimes have no relevance to the actual game.  "We have a great group of kids.  We want them to be a better group for the next coach that has them".  The coaching staffs spend a bunch of hours outside of practice working on practice plans, game plans, and reviewing film. All tackle coaches have to do through state certified concussion training and also training through USA Football.  The coaches also meet with Gull Lake Varisty Coach Ryan Gallogy to make sure the youth football program begins to get the players understanding terminology used at the high school level and some of the offenses and defenses that are used.